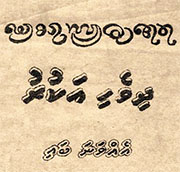 The Adopt-a-Character Program has awarded a grant to support further development of the following three historic scripts in the Unicode Standard:
This grant will fund the development of proposals for encoding scripts that can be included in the Unicode Standard. The work will be done by Anshuman Pandey under the direction of Deborah Anderson (SEI, UC Berkeley) and Rick McGowan (Unicode Consortium).


Over 100,000 characters are available for adoption, to help the Unicode Consortium’s work on digitally disadvantaged languages.