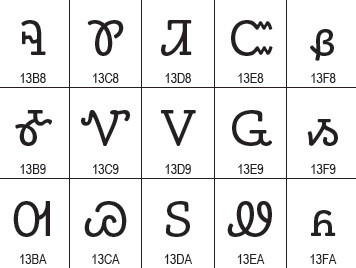 The Unicode Consortium has recently updated the current code charts for the Cherokee script specifically to provide improved reference glyphs for the lowercase letters introduced in Version 8.0. The new font is Phoreus Cherokee, a modern digital design by Mark Jamra of TypeCulture® LLC.

The new charts can be viewed through the current Charts page.
Posted by Unicode, Inc. at 12:57 PM

The Unicode Technical Committee is seeking feedback on a proposal to define a new character property for the class of prepended concatenation marks, also referred to as prefixed format control characters or, more generically, as subtending marks. Characters in that class include U+0600 ARABIC NUMBER SIGN and U+06DD ARABIC END OF AYAH. The new property, named Prepended_Concatenation_Mark and targeted for Unicode 9.0, would provide a mechanism to handle subtending marks collectively via properties rather than by hardcoded enumeration. A detailed description of the issue and how to provide feedback are given in Public Review Issue #310.
Posted by Unicode, Inc. at 2:22 PM

A new revision of UTR #50, Unicode Vertical Text Layout, has been released. The data tables have been updated to the character repertoire of Unicode Version 8.0.
Posted by Unicode, Inc. at 3:51 PM

Responding to continued interest, the editorial committee has created a pair of modestly priced print-on-demand volumes that contain the complete text of the core specification of Version 8.0 of the Unicode Standard.

This edition is the 6×9 inch US trade paperback size, making the two volumes compact. The two volumes may be purchased separately or together. The cost for the pair is US $16.49, plus postage and applicable taxes. Please visit the description page to order.

The Unicode Consortium announces the election of four Directors for a three-year term beginning January 2016:
Alolita Sharma joins the Consortium Board of Directors for the first time. Bob Jung, Greg Welch, and Dachuan Zhang have been re-elected to continue their service as Directors.
Posted by Unicode, Inc. at 3:32 PM

At this point, the characters for Unicode 9.0 are candidates—not yet finalized—so some may be removed from the candidate list, and others may be added. Names, images, and code points may also change, so these candidates are not yet ready for use in production systems. The additions of emoji characters to Unicode are based on the emoji selection factors. Other prospective emoji characters are still being assessed and could be approved as candidates in the future.

There is also a new version of UTR #51, Unicode Emoji, which provides design guidelines and data for improving emoji interoperability across platforms, and gives background information about emoji symbols. Aside from general clarifications in the text, several annexes are moved to separate pages to allow for faster updates, the level distinction among emoji is removed, and certain characters no longer allow for emoji modifiers for skin-tone. These changes are also reflected in new machine-readable emoji data files for implementations.

The emoji charts have also been updated. These include a full listing of emoji characters (with images from various vendors), the default ordering of emoji, annotations, when various emoji were added to Unicode, and more.
Posted by Unicode, Inc. at 1:05 PM