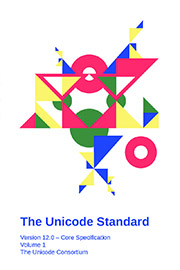 The Unicode 12.0 core specification is now available in paperback book form with a new, original cover design by Monica Tang. This edition consists of a pair of modestly priced print-on-demand volumes containing the complete text of the core specification of Version 12.0 of the Unicode Standard.

Each of the two volumes is a compact 6×9 inch US trade paperback size. The two volumes may be purchased separately or together, although they are intended as a set. The cost for the pair is US $23.46, plus shipping and taxes (if applicable). Please visit the description page to order. 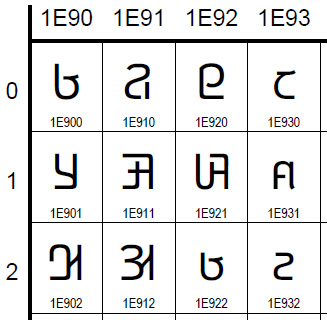 The Unicode Consortium has recently updated the current code charts for the Adlam script specifically to provide improved reference glyphs that align with current community practice. The new font is an updated Ebrima font, with the update coordinated by Judy Safran-Aasen and the font designed by Jamra Patel.

The new Adlam code chart can be viewed along with all of the current code charts.

The Unicode CLDR Technical Committee is pleased to announce the opening of the CLDR Survey Tool for general data submission. CLDR relies on community contributions for its ongoing data refinement and to offer new data to the CLDR user community. The collected data will be released as Version 36 on October 15.

Unicode CLDR provides key building blocks for software to support the world's languages, and is used by much of the world’s software — for example, all major browsers and all modern mobile phones use CLDR for language support.

Version 36 is focusing on:
For more information on contributing to CLDR, see the CLDR Information Hub. If you would like to contribute missing data for your language, see Survey Tool Accounts.

Over 130,000 characters are available for adoption, to help the Unicode Consortium’s work on digitally disadvantaged languages