The Unicode Consortium is pleased to announce the new design selected for the cover of the forthcoming print-on-demand publication of The Unicode Standard, Version 9.0. This is the first time the Unicode Consortium issued an open call for artists and designers to submit cover design proposals. All submitted designs were reviewed by an independent panel. 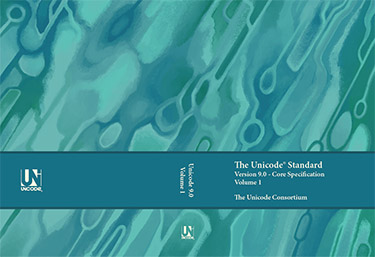 The selected artwork is an original design by Gabee Ayres, a student and teaching assistant at the University of Pennsylvania with a background in fine arts, design and logic. Of her design, Ms. Ayres says, “I wanted to create a cover that reflected the technology inherent in Unicode without looking impassive or unwelcoming.”

The core specification for Version 9.0 of the Unicode Standard is now available, containing significant updates and improvements, including descriptions for six new scripts, 72 new emoji characters, and 19 symbols for the new 4K TV standard.

In Version 9.0, the standard added precisely 7,500 characters. This version continues the Unicode Consortium’s firm commitment to support the full diversity of languages around the world by adding support for lesser-used writing systems of additional languages, including Osage, Nepal Bhasa, Fulani, and the Bravanese dialect of Swahili. Characters are also added to support the Warsh orthography for Arabic in West Africa and for the historic Tangut script of China.

The Adopt-a-Character program has awarded a grant to support further development of Egyptian hieroglyphs in the Unicode Standard. The initial grant allows a Unicode encoding expert to participate in a meeting at the University of Cambridge on Egyptian hieroglyphs. One meeting goal is to progress the representation of ​Unicode ​Egyptian hieroglyphs, including extending ​the repertoire. ​The meeting is hosted by the working group “Informatique et Egyptologie” of the International Association of Egyptologists, and will take place from 11-12 July, 2016.

Egyptian hieroglyphs date from the end of the fourth millennium BCE, and were used for more than 3,000 years. They represent a significant milestone in the world’s written legacy, capturing important literary, historical, and religious works. Egyptian hieroglyphs are studied by academics and also attract interest from the general public, young and old.