The Unicode Consortium is pleased to announce that JMP is now a gold sponsor for: 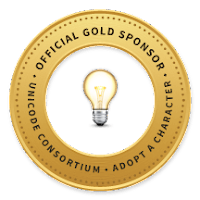 JMP's  sponsorship directly funds the work of the Unicode Consortium in enabling modern software and computing systems to support the widest range of human languages. There are approximately 7,000 living human languages. Fewer than 100 of these languages are well-supported on computers, mobile phones, and other devices. AAC donations are used to improve support for digitally disadvantaged languages, and to help preserve the world’s linguistic heritage.


Scientific advances, engineering breakthroughs and statistical discoveries: Clarity comes to those who explore data visually and interactively with statistical software from JMP. That’s why we adopted the lightbulb — to represent the aha moments scientists, engineers and other data explorers experience. From its beginning, JMP has connected statistics with data visualization for data analysis, later adding design of experiments, predictive modeling, and quality, reliability, and consumer research analysis. Unicode allows us to focus on statistical discovery rather than on character set differences among the seven languages our software supports or on multiple operating systems. That’s another reason we decided to support Unicode’s work, as explained in this post. — JMP

The Unicode Consortium thanks JMP for their support!