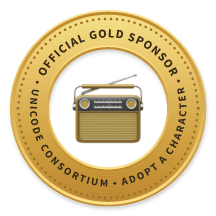 All sponsors are listed on Sponsors of Adopted Characters. More than 140,000 other characters are available for adoption — see Adopt a Character.